A mother of two Shailja Mittal’s startup cab service has got sighs of relief swarming in from the fellow mothers. What Shailja (34) narrates as the intriguing factor behind Koala Kabs is a familiar scene straight out of every household. She recollects her fear to leave her 11-year-old daughter, Krisha, to school in a private cab the day the known driver was absent. She couldn’t risk Krisha’s safety and thus, chose to drive her to school and pick her back herself. The chapter could end right there, right then. But the very thought regarding every mother’s concern for their children’s safety didn’t let Shailja be. The fact that Delhi scores terribly less on the safety quotient only added to her worries. Shailja brainstormed over this long drawn thought and came up with this blow-by-blow remedy- Koala Kabs.

Escape problem, but with a solution!

Koala Kabs, ‘the third child’as Shailja refers to her startup as, started its journey back in June 2017. The aim of this Delhi based startup goes beyond children’s safe transportation. This app cab service targets to provide safety to women in general- whether she is a foreigner or someone from outside visiting the city. A BTech from Delhi College of Engineering and a MNC employee Shailja who is also a robotics trainer, conceptualized the idea. Her friend Anmol, who was previously managing his father’s pharmaceutical business, took up the responsibility to manage Koala Kabs’ operations. The naming might sound unusual for a cab service provider. But, the founder joins the dots with a concrete justification. She compares its motto with the nature of a Koala- cute to look at, but, fierce when it comes to their offspring’ safety! While Koala Kabs are operational in Delhi-NCR now, it aims to set its wheels in other metros and the Tier II Indian cities soon. 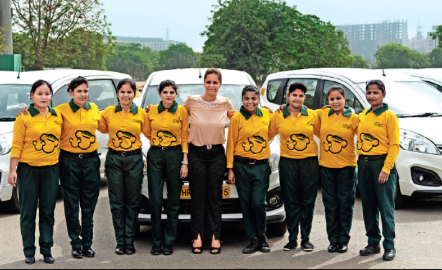 Koala Kabs exclusively target at women. While that might sound great, recruiting women drivers was no cake walk at the initial stage. People’s acceptance was a major concern to potential women drivers. However, Shailja takes pride in convincing them finally. Now, the team has a headcount of 17, including five full-timers and 10 freelancers managing technology and marketing.

Koala Kabs offer a number of services besides the ride-hailing one. Carpooling package is one of those. Opting for ‘My Koala’ package, a woman can hire a cab for a couple of hours. Though, placing a request minimum an hour in advance is recommended. Per 10 kms or per hour the rides are charged at Rs 275. There is ‘Koala Share’, a pre-defined carpool service with fixed routes, chauffeur, and fellow passengers in the car. The rate starts from Rs 6,500 per month per person.

Another package named ‘Koala Xclusive’ is tailor made to fit customer specific requirements. The charges depend on the time and service.

Bootstrapped with Rs 20 lakh initially, Koala Kabs has leveled up to Rs 1 crore from family and friends.

Koala Kabs has served near 6,000 customers in the last couple of years and recorded 100 percent growth. A 300 percent rise in revenues is expected for FY 2019-20.

In current scenario, Koala Kabs have transport biggies Uber and Ola as competitors.

Shailja happily announces that some people, who were skeptical about the startup, are now regular riders!

It’s a highly acclaimed stepping stone, for a woman entrepreneur and for women’s safety all over the country.